I am really getting annoyed now!

WTF is going on here in the land of WordPress? I mean, of course I’m grateful for such a wonderful free service and all, but my posts keep disappearing.

I’ve enjoyed the last couple of days in blogtopia, or blogistan, or wherever it is I am right now. Because of the tireless efforts of others (in particular the noble Swift whose generosity of spirit stands as a lesson for all conservatives) I’ve come into contact with a few blogs that, under normal circumstances I probably wouldn’t have. Some of these include;

And this is just a few examples of what I’ve perused since Sunday.

So, speaking personally, among the beneficial consequences of B.A.D.;

And, again speaking personally, the stark truth I’ve learned about myself and my blog in the wake of B.A.D.;

All in all quite a humbling experience.

Where the hell are my manners!

Yesterday, or tomorrow, is the first anniversary of Blogroll Amnesty Day, a dark day in the history of blogtopia.

So in the spirit of remembrance, and out of respect for the Dean of St. Patrick’s and that antipodean marsupial, I’m going to fill my blogroll with as many blogs as I can, until I throw up! 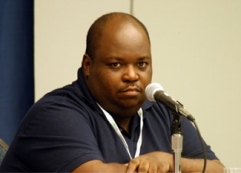 My good friend Leo asked me recently for a few political blog / blogger recommendations, and I did duly tender him with a list, but I neglected to mention one of the most important of them all; The News Blog / Steve Gilliard.

Sadly Steve passed away last June, but his legacy survives. For anyone unfamiliar but interested in the writing of a “a combative and influential blogger on the left“, a recent post on The Group News Blog (The Writings of Steve Gilliard — 101) simplifies the task of locating his work considerably.

Looks like I’ll be busy cruising the “Intertubes”. A PDF of all his writings would be quite a project, anybody thought of that?

That gives me an idea…

Jane Hamsher, founder of firedoglake and one of the top bloggers on the planet, is going in for surgery on Thursday (today as I write this) for breast cancer.

Take care and get well soon.